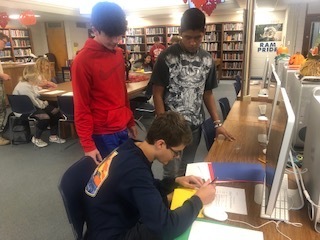 Mrs. Courtney Smith's fourth period AP World History class came to the library today to participate in an economics activity. Mrs. Dickey, librarian, directed the students in the "Unequal Resources" activity. Students were put into groups, then were given a task list and an envelope of resources. There was a scarcity of the proper resources in each envelope, so students had to figure out that they must barter with the other "countries" in order to complete the tasks. The tasks included a tangible example of food, clothing, shelter, industry, and education that they created with the resources. Each group named themselves as a fictitious country name. The winning group with accurately completed tasks received a prize. Mrs. Smith's students have been learning about economic systems and trade routes.